INFRAGLOB at the EISA PEC 2022 in Athens

You are here:
EventsNews 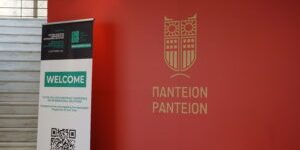 We would like to look back with you at the 15th Pan-European Conference on International Relations and the contributions of INFRAGLOB members to the conference. The conference titled ‘Pandaemonium: Interrogating the Apocalyptic Imaginaires of Our Time’ was held in Athens from 1st to 4th September last year.

The panel aimed at starting a conversation on a framework that moves beyond Western-centrism in the study of transnational practices of justification. As a starting point, it took Boltanski’s and Thévenot’s work on justification out of France (and Europe for that matter) and to transnational practices and their justification around the globe, especially also in the Global South. Building on and adapting their work, papers were to trace multiple practices and repertoires of justification at work  in order to explore ‘orders of worth’ that are multiple and contested. Empirically, papers were invited that analyse a broad range of issue areas, in regard to public and private governance, and including in particular non-Western discourses and practices. We invited conceptual, theoretical and empirical papers; arguing with and against Boltanski’s and Thévenot’s pragmatic sociology.

In the panel chaired by Dr. Raoul Bunskoek, Prof. Dr. Hönke and Dr. Bunskoek presented their conference paper ‘Worlding Orders of Worth: The Justification of Corporate Practices in China-Africa Relations’.

The second panel which was organized by the INFRAGLOB project, ‘The remaking of international practices in south-south relations’, was chaired by Prof. Dr. Jana Hönke.

This panel built on the past two decades that have been pivotal for South-South relations, materially, ideationally, and ontologically. While existing scholarship has unpacked the range of discourses and practices that accompanied their diplomatic and economic engagements, how global practices are being made and reshaped in and through these relations from the bottom-up has received less attention. This panel therefore took large-scale investments – such as in ports, roads, agro-industries, or mines by Global South actors in Africa – as empirical entry points. From there, it examined the manifold Chinese, Brazilian, and Indian projects as assemblages of actors and transnational networks of institutions, political elites, practitioners, NGOs, communities, etc., which mimic, transform, and re-make international practices. It suggested reconceptualizing these economic hubs and relations as ‘’frontier zones”, where actors from different worlds meet and (re)negotiate practices and rules of engagement in a context of possibility and making, and around which diverse ideas, models, and techniques of governance are to be observed as they circulate, are replicated, transformed, and contested. The panel argued it is these international practices that reveal the longer-term significance and implications of increasingly plural and multiple international relations – for Africa and more broadly, and particularly in the face of emerging trends and new temporalities spurred by more volatile commodity markets, pandemic disruptions, and overall transforming South-South as much as international relations.

In this panel, Prof. Dr. Jana Hönke, Dr. Eric Cezne and Yifan Yang presented their research on ‘How transnational practices are (re)made in South-South relations’. They were joined on the panel by Dr. Raoul Bunskoek who presented his conference paper ‘Beyond the “China model”. Towards a relational understanding of development practices in China-Africa relations’.

The topic of the second panel will be discussed in full depth in the edited volume on which the project is currently working and on which we will soon give you a brief update!